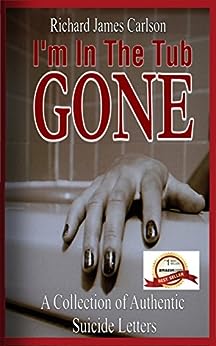 I'm in the Tub, Gone: A Collection of Authentic Suicide Letters

Share
"Mr. Carlson has successfully assembled the definitive universe of suicide notes offering deep insight into the darkened souls that reach the final conclusion that life is no longer worth living. For professionals working with such distraught patients, this book is a must. Nowhere in literature has any other author captured the entire essence of what it is that compels a person to take his or her life. Mr. Carlson brings his reader face-to-face with the overwhelming sense of helplessness that runs as a common thread through the lives of his suicide victims." - M. E. Heisner, Coronado, CA

"I'm In The Tub, Gone by Richard James Carlson is a collection of authentic suicide letters. Mr. Carlson, a former police officer, offers us a rather macabre look into the very private world of those who have chosen to end their lives. Their final words are put on paper (errors and all) exactly as they were written. These suicide letters are undeniably chilling, sad, heartfelt, and terrifying. To read them is akin to driving by a car wreck, you can't turn away from it. You can't help but wonder what might have led these poor souls to take their own lives." -Lori Paris, California