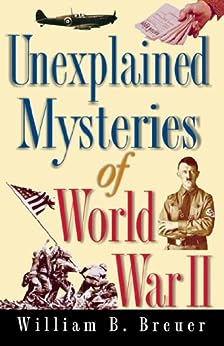 by William B. Breuer

Share
"As combat veterans and high commanders know, logic is often a stranger in wartime." --William B. Breuer, in

The mysterious fire on the Normandie . . . Who really was behind the eerily efficient destruction of the famed ocean liner?

The ominous "Deadly Double" advertisement in The New Yorker . . . Was it a coded leak to Japanese and German spies announcing the upcoming bombing of Pearl Harbor?

The botched Nazi kidnapping of the Duke of Windsor . . . How did a serendipitous series of events save the duke from Hitler's grasp (and the Allied forces from a crippling strategic setback)?

The curious sinking of the Tang

. . . How did this deadliest of U.S. submarines come to meet such an unexpected and mysterious end?

"Anyone interested in twists of fate should find this book fascinating." --Library Journal

"While away a few hours or spend a few minutes at a time enjoying this collection of inexplicable, mysterious, and strange tales." --Nashville Banner