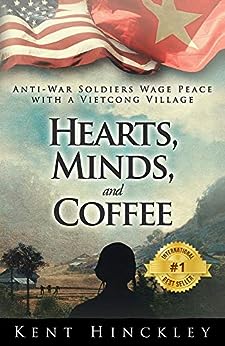 “I like stories that transport me to the scene, and this did. I felt as if I was there and felt how painful it must have been to not want to fight this war yet be driven by honor to do so. The contrast between the hero's view of war and honest leadership resonates still today.” ~DJB A novel about enemies working together in Vietnam, 1969. “Dances with Wolves” meets “Platoon.” Three Army enlisted men, led by an anti-war second lieutenant , were ordered on a dangerous patrol in Vietcong infested territory to support a nearby American regiment. Senior officers expected them to die as happened to the previous patrol. In order to save their lives, the lieutenant sought a truce with an enemy village. Ignoring Army regulations, the four misfits worked to establish trust by helping the village obtain and plant coffee. Months later, a surprise attack by a North Vietnam Army Division against the American Regiment upset the fragile peace. Thrust into the middle of assaults against Americans and counterattacks which put the village at risk, the four heroes crafted a ruse to save those on both sides. The plan collapsed when the commander’s chopper was shot down further magnifying the danger as the four scurried to save the crew. Possessing few weapons and a battered radio with death lurking all around, the four soldiers improvised on the ground. Being hugely outmanned, they realized their lives depended on the friendships they had cultivated with the village farmers and its chief who was a colonel in the Vietcong. This book should be read by all veterans, families and friends of veterans, teenagers to get a historical perspective about the war, baby boomers to appreciate fellow members of their generation, those who went to the Vietnam Wall or haven’t gone yet, military and government leaders, Oprah, and anyone who works for peace. Selected Book Reviews: “As a wife and sister of two wonderful but affected Vietnam veterans, I applaud the writer for bringing the story to a new generation. Glad that someone was able to capture the mixture of emotions this event involved. “ DF “I was interested in this book because my uncle was drafted and sent to Vietnam to fight a war he didn't believe in. … Maybe someday I will have the courage to talk with my uncle about the subject...until then, I feel that I have a better understanding of what the Vietnam vets went through.” JS “First, let me say, that I do have family members in the military and am quite patriotic. I love this book. It tells a different side of humanity during the Vietnam War.” SB “I highly recommend this Vietnam odyssey to anyone who was there, to their loved ones who may want to try to understand their vet's frustrations, and to anyone just interested in a well paced novel.”  LK “Having been there I can relate to so much of the story as I am sure many Vietnam vets can. I surely recommend it to them.” M “Those who are orchestrating our present military and political involvement in other countries could learn something from reading this book.” M “I chose to read this novel because of my brother who served in this ‘conflict’ returned home and by age 27 died leaving two young children ages 5 and ten months. … I recommend this book to any one who has been to the wall or those who haven't made it there yet.” ALH “My uncle fought in Vietnam and rarely talks about his experience, so this tale taught me a lot about what likely occurred during those years from the point-of-view from someone who was actually there.” G