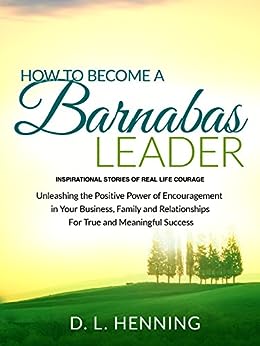 How To Become A Barnabas Leader: Inspirational Stories Of Real Life Courage, Unleashing The Power Of Encouragement In Your Business, Family and Relationships For True and Meaningful Success

What do a Columbia Pictures executive who put Seinfeld into syndication; the founder of Young Life Capernaum for disabled students, a New York City mob victim, and two National Guard Iraq war veterans have in common? Find out how the power of encouragement changed their lives in my new book, How To Become A Barnabas Leader.

Who is Barnabas and Why is He Important?
Most people, even most Christians don’t know just how important this man Barnabas was. Yet, because of Barnabas and a simple yet profound act of encouragement the entire world was changed. Yes, I know that is a bold statement to make but it is true. His brief place in history is recorded in The Book of Acts whose author is a medical doctor named Luke. His real name is Joe or as the Bible says, Joseph the Levite from Cyprus. He was nicknamed Barnabas by the actual Apostles who hung out for three years with Jesus. The nickname literally means Son of Encouragement. That was his gift. That was his life.

What does all this mean? If not for Barnabas
1. Encouraging this new believer Saul and
2. Encouraging the disciples and apostles in Jerusalem to accept Saul as one of them...
...then we may have never known of the incredible missionary journeys of Saul whose new name was Paul. All the letters of Paul the Apostle written to the new churches he planted and the depth of Christian teaching and instruction he provided might not exist.

But we have them today, over 2000 years later documenting the spread of Christianity. More importantly Paul’s brilliant writings teach us how to live, provide hope and courage to live out our faith. Thank God that Barnabas stepped into history at a critical moment and made a difference simply by being a man dedicated to encouraging people. As Paul’s notoriety spread, Barnabas takes a back seat. Yet he was obedient to his calling to be the Son of Encouragement.

Is it possible that this is your calling too? I encourage you to ponder that question. What if something you did or said could also change history forever for the better?
In the following chapters you are about to meet six people who have done just that.

Ever since high school in Rochester, New York I had always wanted to be a disc jockey.

When I first moved to Kansas City, a retired minister named Drexel Ferguson was caretaker at a church campground on Antioch Road in Overland Park. In exchange for being his assistant and mowing the entire twenty­ three acre lawn, we lived on the campground in what I affectionately referred to as the “cardboard cottage.” It was a cute little place with our garden planted along the side.

One day Reverend Ferguson handed me a book and suggested I read it. It was the best gift I ever could have been given. The book was The Success System That Never Fails by W. Clement Stone. Stone was a Chicago insurance man and also the manager of Napoleon Hill, author of Think and Grow Rich.

Stone’s Success System book was just the huge dose of encouragement I needed to have the guts to let go of my KCNW Morning Drive Disc Jockey gig and take on my new radio sales job head on. The principles learned in that book would serve me well in a career that spanned three decades and ten radio stations from the east coast to the west coast.
  
It seems like such a small thing doesn't it? But little did Drexel Ferguson know that day when he handed me a book and told me to keep it, that it would literally change the rest of my life.

How about you? Are you hearing God's call to be an encourager?

"May our Lord Jesus Christ himself and God our Father, who loved us and by his grace gave us eternal encouragement and good hope, encourage your hearts and strengthen you in every good deed and word. 2 Thessalonians 2:16-17