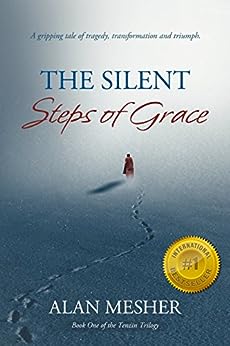 The Silent Steps of Grace: A Gripping Tale of Tragedy, Transformation and Triumph (Book One of the Tenzin Trilogy 1)

Share
THE SILENT STEPS OF GRACE is a gripping tale of tragedy, triumph, and transformation. It spans the turbulent period in world history from 1925 to 1967 with particular emphasis on the Tibetan Holocaust and the Vietnam War. The central character, Tenzin, is a young Tibetan monk of exceptional promise. When the Chinese invade Tibet and approach his monastery, Tenzin's superiors order him to flee. He is instructed to cross the Himalayas and make his way to the American embassy in Delhi where an airplane ticket to Los Angeles is waiting for him. Months later, he arrives in America alone and exhausted, his robe and his life both in tatters. Eventually, a letter arrives informing him that everyone he loves has been executed by the Chinese. Plunged into an all consuming grief, he slowly claws his way out of despair to become a beacon of hope in his adopted land. THE SILENT STEPS OF GRACE is not only a compelling story. It is a spiritual guide to overcoming life's challenges. It is instilled with hope, courage, inspiration, and a method to handle the difficult tests that life brings everyone, without exception. You won't want to be without it.