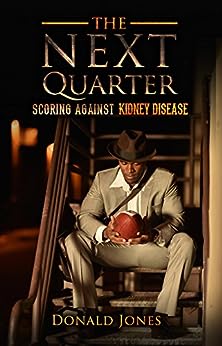 The Next Quarter: Scoring against kidney disease

Share
Donald Jones, III, a former professional athlete, entrepreneur, motivational speaker, father, husband, and now author shares his personal journey of growing up in the inner city of Plainfield, New Jersey to playing in the National Football League (NFL), being diagnosed with an incurable kidney disease, to his triumphant experience of becoming a kidney transplant survivor in his compelling and inspirational new autobiography, The Next Quarter: Scoring Against Kidney Disease.

At the age of 23, standing six feet tall, weighing over 200 pounds, Jones’ heart was overflowing with the spirit of determination and grit. He had always dreamed of playing in the NFL and the opportunity he had worked countless hours for was finally coming to fruition. Though he captured the attention of several NFL organizations during his successful career playing football at Youngstown State University, Jones’ names was not called on Draft Day, but a call would soon come from the Buffalo Bills who signed Donald as an undrafted free agent in 2010. As a wide receiver for the Bills, between 2010 – 2012, he racked up 82 receptions for 887 yards, and scored six touchdowns while playing in 35 games, 22 in which he started.

Jones’ journey to the NFL was truly an uphill battle marred with numerous challenges, disappointments and setbacks. As a kid growing up in the inner city, Donald was exposed to a community saturated with drugs and violence; a lifestyle that would normally prohibit most from experiencing any type of success in life. Consequently, his exposure to an underworld of crime caused him to get an A in street smarts but a D in the classroom. He not only lost a full-scholarship to a superior Division-1 school, Donald became entangled in a drug investigation, which caused NFL scouts to question his viability as a professional athlete. In The Next Quarter, Jones writes, “I had to make my mistakes in life before I realized that I was wasting my time and talent. It really started to bother me that the police knew me on a first-name basis. I put so much energy into being the best looking and most popular that I neglected to pursue my dreams right away. I wanted to fit into crowds I had no business being around. I didn’t realize that I already had the golden ticket in my hand.”

Determination and perseverance are two words Donald Jones uses to describe his climb to success on the field. Faith is the word he expresses to describe his battle against kidney disease. His sophomore year in college, Jones was diagnosed with IgA Nephropathy, also known as Berger’s disease, which is an incurable autoimmune disease that affects the kidneys. While playing with the Buffalo Bills, he started experiencing symptoms such as high blood pressure and vision loss, which severely affected his health and effectiveness on the field. Subsequently, in 2013, Donald was forced to hang up his cleats and retire from the game he loved. Recalling how he felt after ending his career, Jones laments in The Next Quarter, “I had played sports since I was seven years old. I had fought tooth and nail every day just to make it in. I even became a starter in my first year after being undrafted. I beat the odds. Now I was 25 years old fighting for my life.”

On December 3, 2013, Donald’s life was saved with a kidney transplant from a donor who originally gave him life, his father, Donald Jones, Jr. Currently, Donald travels the country bringing attention to and raising money for Iga Nephropathy. He is a national spokesperson for the Kidney Foundation, and a board member for the IGA Nephropathy Foundation of America. Additionally, Jones has spoken on Capitol Hill before Congress, at the New York Presbyterian Hospital where he was recognized along with another transplant survivor, Robin Roberts, anchor for ABC’s Good Morning America, and was recently an invited special guest to a transplant event sponsored by The Transplant Forum at Columbia University Medical Center.