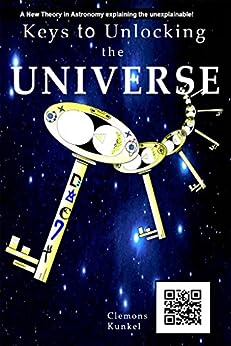 Keys to Unlocking the Universe

Share
Deep Space is where we want to go but we are limited by our knowledge and understanding of the universe. If we knew more about why the universe looks the way it does, could we not go further?
Over the last hundred years, through technological advances humanity has been able to reach out and observe the great cosmic mysteries. Penetrating over 15,000,000,000 light years into the past only to find more and more enigmas compounding upon our original, fantastical, and yet unresolved discoveries. Imagine if our understanding of the foundations of astrophysics were intact. Where would we be able to go? In this book, Keys to Unlocking the Universe, Clemons Kunkel presents his ground breaking theories on all great scientific discoveries, such as Black Holes, Dark Matter, and the Dark Energy, that were previously disjointed, now brought together in one cohesive theory. Through four years of presentations and research into the theories, he has discovered over thirty- seven empirical evidences providing substantial, undeniable validation beyond coincidence. A cornerstone of this theory includes the events (CMB, Great Attractor, Great Wall, Great Void) viewed previously as isolated, unknown phenomena can now be understood as integral.
New theories that explain why the universe looks the way it does, because it has to. This is not Super String Theory or M theory or Super Gravity Theory; it is a totally new mind-blowing theory by the Super Professor.
Like how space is squeezed and pushed on by the other dimensions .Do you think it is possible to travel faster than the speed of light? He thinks so. Do you know how fast you are traveling in space right now? If you take just one of the speeds like the Milky Way galaxy that we live in, it is moving toward a region of space call the GREAT ATTRACTOR at a breakneck speed of 14,000,000 (14 Million) miles an hour. What if we were to use the speeds that we already have to help us reach that unbelievable speed of light (186,282 miles per second) and not break the know laws of science, what would that be worth in space travel? Just think about living on an exoplanet (planets around other suns) would you even want to go to another world? Mars One has a fantastic idea of putting people on Mars. More than 2000 brave and adventurous people sign up to live on Mar, did you sign up? Clemons Kunkel did because he thinks we must get use to traveling to another planet close to us before we can try deep space exploration. This well take some time getting everything put together to live off earth, but time is something that we may not have that much of. Why? There have been 5 mass extinctions here on earth and we should not be here for the six catastrophe event, space is where we must go to survive. We are also destroying earth resources, there are just too many of us, but there is an easy solution, move into space where there is plenty of room for us to live, we just need a better way of getting around the cosmos. The new theories in this book maybe what we need to make that possible. So come on in and read these unbelievable theories, of why our universe looks the way it does. It is caused by a joining of two universes that make up to one universe we see today and could there even be more than two joining? There is a lot that we see that we do not understand. Is it because we are looking at the universe wrong? What if we knew that we are one of the smaller universe and look at the universe from that point of view could we not understand more? It is a big step to go that way but he says we must to get further in to space. Clemons say looking at the universe this way help to make everything clearer. So take a chance and look inside and be amazed at what you will discover in (Keys to Unlocking the Universe).