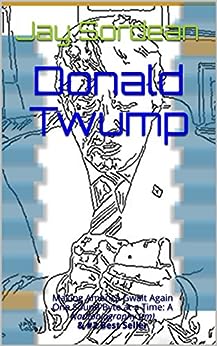 A new President has been selected for the U.S. A master of tweets and sound-byte policy making. A new Republican who ran as an "outsider" and a "billionaire." 140 characters defining the new reality. The new concept of "fake facts" being reality.

Donald Twump is the new parody moniker to represent this phenomenon. The Supreme Tweetmeister, the King of Tweets (or is it King of Twits?). A radical new "vision" of what it is to be an American.

Was his election a ground-swell as he claims? An overwhelming mandate from the people? Election results suggest that about 25% of the eligible voters voted for Trump. 26% voted for Clinton. A "HUGE WIN" is an exaggeration at best. At worst? A pathetic attempt to boost "self-confidence" and a volley to give supporters a "rally cry." He is actually a #2 best seller, just like this book.

Part parody and part analysis, this book explores what this new reality personality era may mean for America and the world.