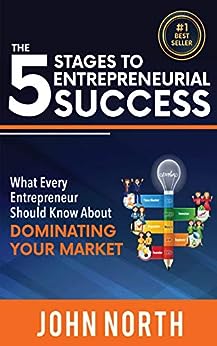 The 5 Stages To Entrepreneurial Success: What Every Entrepreneur Should Know About Dominating Your Market

It's a common question but what makes a successful entrepreneur?;

Of course, this question starts a whole conversation about the definition of success.

It's my belief that success isn't just about making money. Most people start a business for the freedom they expect it to give to them. The cold hard reality is that most entrepreneurs end up working longer hours and for a lot less than a typical wage.

Why would any sane person work for less money, work much longer hours and have way less freedom than they probably had in a day job?

The reason is they have a much bigger vision for their future than the average person.  So why if someone works harder than an average worker then why doesn't every entrepreneur become massively successful?;

What is the secret that helps the budding entrepreneur become successful?

It's probably a clique but there is a formula to it.;The challenge is that there are plenty of mad scientists out there selling you their secret formula.  Often it really only works for them or a few followers.

Why?  Because they probably got lucky along the way.

There are no real shortcuts to success, of course, there are exceptions to the rule.;It's called luck or being at the right place at the right time. ;But often even the overnight success stories actually have a hard-luck backstory and years of failure and frustration.

This book is about the process, strategy, and implementation of your ideas.;The 5 stages are our way of showing you a viable success path and will help you understand the mindset you need to develop to achieve your definition of success.;

You may be tempted to diagnose yourself at one stage and skip the stages prior.;The reality is that often problems and challenges occur due to lack of fundamentals.

For more information visit evolvepreneur.club and search for our "evolvepreneur" podcast in Apple.