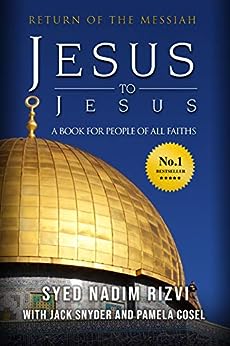 Jesus to Jesus: What Islam Says About the Return of Prophet ISA (PBUH). The Messiah Returns to Fight Dajjal and Save All Humanity.

#1 National Bestseller on Amazon in FOUR categories including Islamic Quran, Religious Studies – History, Middle Eastern Literature, and Christian Futuristic Fiction. This bestselling book is the story of Jesus, Prophet Isa (Peace Be Upon Him) , as never told before. From the Islamic perspective, this epic story spans twenty centuries, taking us from the virgin birth of Jesus to the near future with his return to Earth and his final world-shaking conflict with the Anti-Christ. The inspiration for this story is the current political, social, and global situation where fundamentalism and extremism are on the rise. Factions such as ISIS and Al-Qaida have damaged the beautiful and peaceful image of Islam. It is a fact that 99.9% of the Muslim population does not agree with this “Extremist Un-Islamic” ideology. We feel that someone needs to come forward and counter such elements because their actions are against the peaceful teachings of Islam. Jesus to Jesus unites all peace-loving people, Muslims, and Christians alike, around the birth of Jesus, Hazrat Isa (PBUH) , and his return to fight against the Dajjal (Anti-Christ) . Prophet ISA is one of the most intriguing men ever to walk the Earth. He came to this world as a Messiah to Jews, Christians, and Muslims alike. Jesus to Jesus will bridge the gap between Islam and the West by telling the story of Jesus (Isa) from the Quranic narrative . People will see a side of Islam as never before. Follow the book’s characters on their exciting journey as they discover the Islamic story that ushers in the end times as Isa (PBUH) returns to do battle with the Dajjal (Antichrist). Be ready for a most chilling and exhilarating ride full of twists and turns. A truly breathtaking journey that you will not be able to put down.