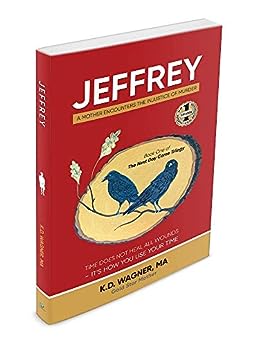 JEFFREY - A Mother Encounters The Injustice Of Murder: Time Does Not Heal All Wounds - It's How You Use Time

Tragedy often strikes us without warning, like a lightning strike in a storm. For K. D. Wagner, a lightning bolt of devastation struck her as she drove a tractor trailer through a California mountain pass. Somebody murdered her eighteen-year-old son, Jeffrey. Suddenly, her world reduced to the smoke and ashes of every parent's worst nightmare.

Wagner chronicles this event and the aftermath in this gut-wrenching narrative of loss, anguish, injustice, and finally, hope. From her initial solo navigation of a dangerous mountain pass in a loaded semi to the peaceful internment of Jeffrey's ashes in a Hawaiian cove, Wagner invites the reader on her journey through loss to find a Different Place, a place of life after.

Along the way, she shares the tale of a life cut short-his challenges, his gifts, his adventures. Jeffrey: A Mother Encounters the Injustice of Murder, is a tribute to the human spirit and the love between a mother and son, a love that survives the cruelest of lightning strikes, the strike of death.