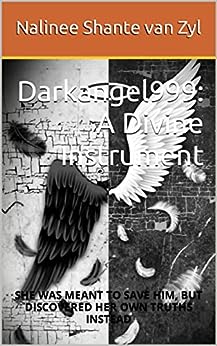 Darkangel999 has been reincarnated over 1000 years as human on earth by The Creator. She is sent to save the soul of the soulless, the seed of The Fallen, one every century.

What she has known about who and what she is for the last three thousand years is discovered to be a lie in this last century of hers on Earth as Shanelle.

The Soulless she is meant to save in this century, Justin. is like no other she has had previously and her love for him goes beyond just doing her job.

She goes against the rules by marrying Justin and having children with him.

He is abusive in every way, physically, emotionally, verbally and financially and Shanelle needs to make the decision whether to leave him and fail at her job or to endure the abuse and try to save him.

This book is about non-conformity, free will, standing up for what's right, fighting against all odds and ultimately taking control of one's own life to reach your goals and passion.

Set in the fictional worlds of The Holy City, The Dark City and The Abyss as well as earth, this book will take you beyond your imagination into beautiful realms with plot twists and turns across numerous chapters. It is controversial, thought provoking and therapeutic. You will at times both love and hate the protagonist as well as the antagonist.

It spent 52 weeks in the top ten on Wattpad in the genres for Therepeutic and Guidance.