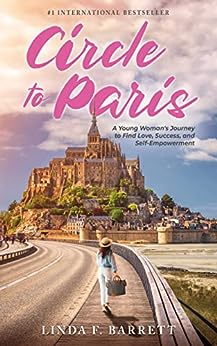 Circle to Paris: A Young Woman's Journey to Find Love, Success, and Self-Empowerment

#1 International Bestseller on Amazon in FIVE categories in CA, FR, and AU. Including World Literature in FR and CA. American Women Writers and Adventure Travel in FR. French Literature and French Drama in AU. #1 Hot New Release in THIRTEEN categories in four countries including US, AU, CA and FR. Honora Blanche Favre had it all: Beauty, Brains, Friends, Family, and Riches. Until one day Life slaps her down. Hard. She becomes a pariah, a loser overnight; even her parents are ashamed of her. Napoleon Bonaparte’s revolutionary system of education created more than 100 years before Honora was born, makes her into a failure at the tender age of 18. She is powerless to change it. The belle femme is exiled forever from the only thing she has ever worked for – her education and going to a prestigious University, as all her friends are doing. In a panic, She bolts from her family and her life in Paris – escaping to the Normandy countryside. While traveling through Normandy’s ancient, spectacular places like le Bec-Hellouin and Mont Saint Michel, Honora is pulled into a cyclone of romance, intrigue, danger, and personal achievement. Honora finds something deep inside of herself: courage, self-love, and self-determination. She realizes there is a survivor living inside of her. A fighter. A tenacious girl that just won’t give up on herself and those she loves. “Honora flunked the Bac – twice – and could never present herself at the famous Sorbonne or any other University whatsoever or wheresoever in the world. She was now branded as an academic loser in her own country.” Christine Paul was everything that nobody ever wants to be: Bitter, Ruthless, Evil. She deceives and exploits the most important lawyers and business elite in Paris for decades. Masquerading as the respected doyenne of a prestigious law firm, her real business is running a blood-thirsty network of drug importers and distributors throughout Europe. And young, naïve Honora is in her way. “Everyone at the firm had always known that la Paul was a cold-blooded tyrant. The fear or dread of the beastly woman was something all the office staff shared, and even some of the lawyers.” Honora’s journey in a Circle to Paris is a magical, mystical, and spectacularly beautiful one, leading her across landscapes, locations, and villages immortalized by Impressionist artists like Monet, Matisse, and Renoir. She experiences the thrill and excitement of a first real love with a gorgeous royal Duke who plans to marry her. With Philippe d’Orleans, Honora comes to know the passion and primal, unquenchable desire that a woman can have for a man. And she experiences the pain and confusion of a romance on the rocks. Just as despair begins to engulf Honora, people cross her path to give her friendship, understanding, wisdom, and sanctuary. Without realizing it, Honora is being transformed into a new and different woman. “Honora had forgotten how clean, crisp, and sharp the air was on the Bonneville granite plateau. It was about 150 meters above sea level, but the purity of the air was almost like being high up in the Alps. It was pure oxygen, and the heavens had not changed since Monet, Matisse and Renoir set up their easels here to paint them.” The Circle is complete when a shocking turn of events compels Honora to return to Paris – although no longer a failure, nor a burden, nor a victim. She returns triumphant and independent to face a future that she has never imagined – carrying the promise of a new life inside her, taking charge of her parent’s law firm administration, and becoming the stalwart of her family, as they face accusations that could destroy everything that the Favres have worked for all their lives.