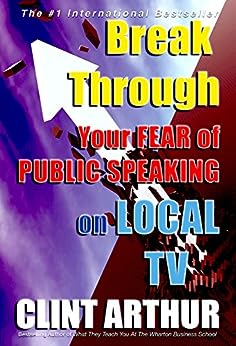 Break Through Your Fear of Public Speaking on Local TV

Share
Did You Ever Imagine That The BEST Place To Break Through Your Fear of Public Speaking Would Be on Local TV News & Talk Shows?

According to Clint Arthur, It’s TRUE!

And he ought to know: a naturally shy and insecure person, Clint has overcome his introverted nature and appeared on 63+ Network TV News & Talk show interviews, including The TODAY Show, while his students (he calls them Magic Messengers) have booked themselves on more than 1665 appearances under his guidance.

In this entertaining, motivating, page-turner you will discover...
• “Elvis Presley’s Secret” about Stage Fright
• Clint’s SPEAK Formula for Public Speaking Success
• His “TV Formula” for Increased Confidence
• Tom Cruise’s "$20,000,000 Secret"
• How You Can Use the Same Strategy that Frank McCourt used to win a Pulitzer Prize so that You Can Win Your Battle Over Fear

Why spend one more day held back in life by your fear of speaking in public when you can smash that barrier once and for all, and become a more charismatic, better-looking, happier, more confident, improved version of yourself on Local TV?