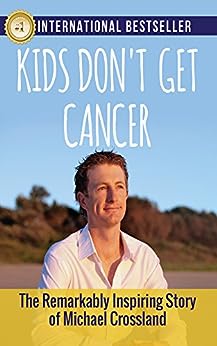 Share
Michael has an absolute passion and belief in people’s ability to change direction and become who they truly want to be and achieve success. This passion stems from his own story …

Before Michael was even one year old, he was diagnosed with an aggressive cancer of the central nervous system – a tumour had taken over half of his tiny body. The chance of Michael surviving was virtually non-existent. He started chemotherapy at 1 year old and by his second birthday, doctors had basically given up all hope. His only hope was taking part in a drug trial program – a program of which Michael was the only participant to survive the treatment. Although he survived, he was left with some permanent scars – only one lung, a damaged heart and a sensitive immune system.

Michael Crossland sets an example for all of us. He's a man who has faced (and still faces) extreme challenges in life, but he never gives up. And despite his own obstacles, he always puts others before himself and gives so much to people in need.

A true inspiration. A true hero.

As one of Australia’s most sought after inspirational speakers Michael has defied the odds of a life threatening cancer to build his life of exceptional achievements. He is a regular inspirational speaker for corporations, schools, professional sporting organisations and universities throughout the world. In the last 12 months Michael has presented in front of over 250,000 people around the globe. His journey has been shared on many TV programs including Fox Sports, ABC, ChannelSeven & Nine networks, Full Potential TV, The Get Inspired Project, Inspire Me Today program and countless radio shows throughout America, Fiji and Australia.

Along with his award winning program about his life on Australian Stories, Michael has also recently featured in a humanitarian documentary about the countless lives saved through his orphanage and school in Haiti that he is involved with.

Diagnosed before his first birthday and spending over ¼ of his life in hospital, doctors told him school and sport were not options. Infection and fatigue were too great a risk, reaching his teenage years would be a miracle. His only wish was to lead a normal life and be able to do all the things that other kids took for granted every day.

But he had a dream and the undying determination to achieve the impossible… No matter the size of the obstacles that lay ahead. Now, an accomplished businessman, National Ambassador for Camp Quality, Australian of the Year finalist, Australia Day Ambassador and international hall of fame inductee, Michael inspires people from all walks of life.

It is no doubt he has a heart for giving and a skill to engage people from all walks of life. Within the last five years he has gone from being one of the youngest State Development Managers for one of the largest companies in the world, to running five banks then leaving his finance career to follow his dreams in making a global impact and he certainly has done that!

Michael’s story “Field of Dreams” was documented on Australian Story, ABC TV television. Through this documentary, his message touched the hearts of a nation, with his story of how he overcame seemingly insurmountable obstacles to achieve success in both his personal and professional life.