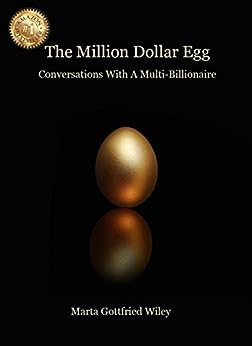 The Million Dollar Egg: Conversations With A Multi-Billionaire

Share
Million Dollar Egg" is a super‐fiction about Marta Wiley’s meetings with Mr. Heart a self made billionaire. Marta decided to use Mr. Heart as her muse in the story, so she could expand on her own aspirations. Marta writes in super-fiction so she can write about her own experiences in a fun and light-hearted manner. Marta would enjoy nothing better than to know she is touching the hearts and souls of people worldwide. Worldwide is something this Author is accustomed to already. The Million Dollar Egg is Super-fiction and inspired by Magical Realism
© Marta Wiley Studios 2014

MARTA WILEY is an “Internationally Renowned Artist” - Painter, Singer, Entrepreneur, Filmmaker, Speaker, Actress, and Author. She holds a record for being one of the most prolific Artists in the 21st Century. Painting over 10,000 paintings, Top Poster sales grossing Millions, writing over 2,000 songs charting Top 20 USA Music Charts “Beggar”, “Signal” & “Certainly”, Marta has written several compelling novels: “The Water Daughter”, “The Shield & The Eight Immortals”, and “The Million Dollar Egg”.

Extremely talented star and CEO of “Marta G. Wiley Studios”, she is a Trendsetter and is bringing inspiration to millions of people around the globe. Marta has been in 300 galleries worldwide.

With “Celebrity Artist" status, Marta is known as a revolutionary champion toward “Education of The Arts” working with Autistic children. Marta has been seen on FOX NEWS, CBS, CNN, Oprah OWN Network, hundreds of publications, movies and international magazines. Currently she is earning her degree in Psychology & Entertainment Law at Harvard.