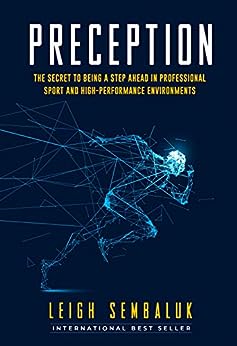 Preception: The Secret to Being a Step Ahead in Professional Sports and High-Performance Environments

The best athletes in the world (Gretzky, Manning, Messi, Jordan, Navy Seals) were able to be a step ahead of their opponents. They were not the most athletic, the biggest, or even the most skilled, they somehow just made things seem effortless and easy. Time "slowed down" for them, decisions became easy. They honed an incredible skill called preception. Preception literally means 'A taking beforehand'. Every one of them had their next few steps planned out and could adapt and make complex decisions 'on the fly' This book discusses how the secret to unlocking potential in high-performance environments takes place before an action ever starts. Awareness of the environment combined with effortless decision making is key to acting earlier than opponents. "Whomever acts first, wins" when it comes to sport.

The book not only highlights the important of this, it gives insight into how to train and develop the skill of preception, something has traditionally been believed to be untrainable.