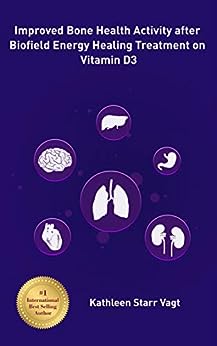 Share
“The aim of the study is to evaluate the role of The Trivedi Effect®-Consciousness Energy Healing based vitamin D3 and DMEM medium on bone health parameters in vitro using MG-63 cells. The parameters of bone health tested are alkaline phosphatase enzyme (ALP) activity, collagen levels and bone mineralization. The test items (TI) i.e. vitamin D3 and DMEM medium were divided into two parts. The test samples received Consciousness Energy Healing Treatment by Kathleen Starr Vagt and samples were defined as the Biofield Energy Treated (BT) samples, while the other parts of each sample were denoted as the untreated test items (UT). Cell viability using MTT assay exhibited increased cell viability more than 72% with safe and nontoxic profile among test samples on MG-63 cell line. ALP was significantly increased by 140.8% (50 µg/mL), 167.3% (100 µg/mL),and 223.5% (50 µg/mL) in the UT-DMEM+BT-TI, BT-DMEM+UT-TI, and BT-DMEM+BT-TI groups, respectively as compared with the untreated group. The level of collagen was significantly increased by 120.7% and 93% at 1 and 10 µg/mL, respectively in the UT-”