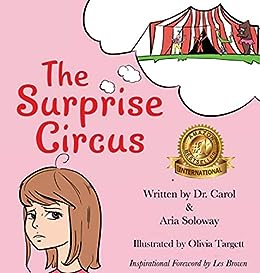 INTERNATIONAL AMAZON #1 BESTSELLER and #1 NEW RELEASE “The most important investment we can make is in our children; therefore, I’m thrilled my messages are presented to children in The Surprise Circus.” –Les Brown, motivational speaker. When the circus doesn’t come to her town, six-year-old Aria is disappointed. She calls the ringmaster of the circus and asks him to send the circus, but he doesn’t. Instead, the craziest things start to happen! Every week, the ringmaster sends Aria a package—each containing an amazing circus character. But Aria has to put the circus characters in the backyard because each one does something very silly that upsets her mommy and daddy: the magician hides her baby sister, the strongman lifts all the furniture, and the juggler throws everything, even her baby sister, in the air, and the fire eater burns the curtains. The circus people ask Aria to become their ringmaster, but she isn’t sure she is brave enough to speak in front of lots of people. Aria starts to think about all the things she can do—all the things she’s great at. She learns to believe in herself and is willing to work hard. She realizes she can do anything—even run The Surprise Circus.