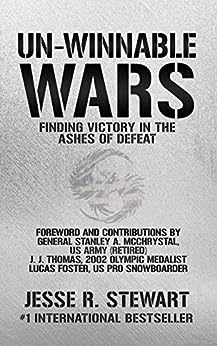 Un-Winnable Wars: Finding Victory in the Ashes of Defeat

Society in mass is experiencing pandemic levels of an “inability to deal with discomfort and struggle,” after loss and/or setback on all levels. However, this mentality has been rampant across history, especially when recording critical information, lessons, and knowledge from unconventional warfare. These essential lessons could not only save a future generation but guide policies to prevent future conflict in the first place. In history, “Unconventional” warriors rise up to “Counter the Insurgency” often against great odds with limited funding, minimal leadership (with knowledge of tactics), and minimal support from the established “Conventional” leadership generally resisting change. This book is an attempt to connect the author’s experience while (at first unknowingly) commanding in a Counterinsurgency War, together with the research, understanding, and application developed in the U.S. Army’s Command and General Staff College’s “Art of War” Fellowship Program. Analysis of the following attempts the connection: The resulting knowledge in this book, along with other recent studies on unconventional conflict extends beyond the battlefield and military. J.J. Thomas (Olympic Medalist) and Lucas Foster, U.S. Professional Snowboarders, highlight the similarities of mindset and application to that of the U.S. military (especially Special Operations Forces) based on recent connections to veterans. Their contributions to this book in “developing, collaborating, and delivering this ‘Hard-fought Wisdom’” increases the chance to keep the knowledge relevant, alive, and not forgotten. That contribution is significant for two reasons: #1 International Bestseller in TWO countries including Afghan War Biographies in the US and Vietnam War History in AU. #1 Hot New Release in FOUR countries in FOURTEEN Categories including Military Special Forces, Intelligence & Spies History, Afghan War Biographies, Iraq War Biographies in the US. Vietnam War History in AU. Vietnamese History, War & Peace in Current Events, Weapons & Warfare, Vietnam War, and United States Veterans in CA. War & Peace, Philosophy Reference, and Biographies of the Vietnam War in the UK.