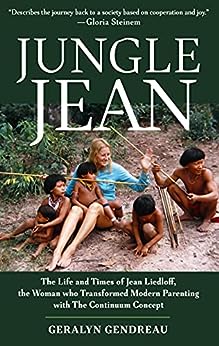 Jungle Jean: The Life and Times of Jean Liedloff, the Woman who Transformed Modern Parenting with The Continuum Concept

JUNGLE JEAN is the timely and captivating biography of Jean Liedloff, an original thinker and cultural rebel whose insights into human nature have impacted tens of millions of people around the world. This is the story of a Manhattan socialite who left the glamorous life and traveled to the pristine regions of the Amazon on a diamond hunting expedition. Two years later, on her second expedition, she lost all interest in diamonds. The indigenous people had allowed her to see deeply into our ancestral past and into the heart of human nature. This was the real treasure.

So intrigued by the natural harmony among these people, Jean returned to the jungle, living for months at a time with the Yequana, a rainforest tribe that had never been in contact with the civilized world. Far more sophisticated than we are relationship-wise, the Yequana lived in a state of blessed good cheer. Why? Jean wondered. Are they having such a good time with the very human nature that gives us so much trouble?

In time, Jean realized the indigenous people she met in the jungle knew what we have forgotten:

Jungle Jean spans the better part of the 20th century with scenes from Jean’s childhood in Upper West Side Manhattan, her life as an ingénue modeling for Paris Vogue, the legendary “Party of the Century” on the Grand Canal in Venice, and her unusual alliance with Count Enrico Middleton, the blond-haired, blue-eyed Italian noble and jungle explorer. After her first expedition to the Amazon, Jean returned to her native New York for a different type of adventure, hobnobbing with George Plimpton, Norman Mailer, Andrew Wyeth, and Beat Generation freethinkers of the 1960s.

Jean returned to the jungle three more times and, upon her return to the states, became a minor celebrity, even appearing on the Johnny Carson show with her pet anteater Clovis in tow. Ten years later, after her final trip to the Amazon, she wrote The Continuum Concept (TCC), which became a childrearing classic and led to her decades-long career as a trusted advisor to parents around the world. Millions of parents have said, “After reading Jean’s book, I threw all the other parenting manuals away.”

But TCC is more than a childrearing classic, it's a treatise on human nature. You see, the continuum itself encompasses all human relationships and our relationship with the natural world. Jean’s experiences caused her to question our culture’s basic assumptions about human nature—assumptions that have never been more devastating than they are right now.

The startling conclusion Jean arrived at—that we are innately cooperative and designed to be happy—carries a vital, uplifting message for our time.

Jungle Jean offers powerful insights on how to create secure, high-functioning relationships. All who crave enduring, harmonious love bonds will be deeply touched by Jean’s story.

Imagine what the world would look like if the whole of humanity truly understood our essential, inbuilt needs. And that when those needs are met, we grow into happy, cooperative people who live in harmony with others and have the clarity of mind and heart to solve our biggest problems.