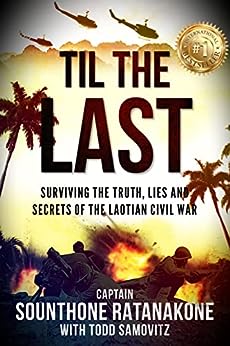 Til The Last: Surviving the Truth, Lies and Secrets of the Laotian Civil War

The true story of Captain Sounthone Ratanakone is simply incredible. He was born into royalty in Laos, was a war hero and a CIA operative in the Secret War in Laos during the Vietnam War. The captain barely survived being a POW in a communist concentration camp (which the communists to this day deny ever existed), made a death-defying escape from the concentration camp, had to escape the communist regime again once he had settled back home, and lived in a refugee camp. Til The Last is a story of heroism, patriotism and self-sacrifice at the highest and most dramatic levels.