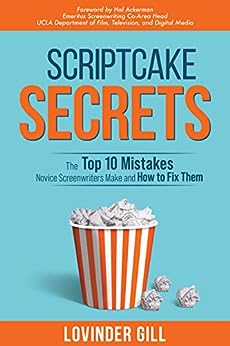 Scriptcake Secrets: The Top 10 Mistakes Novice Screenwriters Make and How to Fix Them

"A professional screenwriting instructor shepherds would-be scribes around common hazards of his chosen field in this debut writing guide. Gill has taught screenwriting for 20 years at such institutions as Drexel University in Pennsylvania and Glendale Community College in Arizona, and he’s noticed a common pattern among his students. First-time screenwriters are generally excited and full of ideas—until they hit a wall: “It feels good until they get somewhere between pages 20–30,” he notes. “Then, they run out of things to write about. Why is there nowhere else to go? Why is it so short? Where is the rest of the story? What do they do now?” There are plenty of possible reasons why screenwriters can feel stuck or why their screenplay isn’t working, but Gill asserts that he’s figured out the 10 most common mistakes that account for most of their woes. From the pitfalls of the concept-only screenplay—featuring an idea, but no story—to the clutter of unnecessary characters and pointless scenes, Gill takes the reader through each mistake in turn, explaining how they come about and how writers can fix them, cut them, or avoid them entirely. Gill’s prose is smooth and conversational, and he has a way of explaining his concepts that will stick in readers’ memories. For example, he warns screenwriters not to select their genre before figuring out the emotional arc of the story—a mistake he describes as “writing from the outside in”: “Choosing a concept (or even a genre) first is like creating cake-shaped icing (concept) that you hope the actual cake (story) will fit into.” The book is divided into problems in the first half and fixes in the second, effectively breaking things down before building readers back up. Scattered throughout are 44 “screenwriting truths” that offer quick bits of wisdom. Readers frustrated with their past screenwriting efforts will certainly come away with a new way of approaching future scripts. A comprehensive and well-presented set of writing tips."
~ Kirkus Review

"This was a quick read, but I found myself slowing down to savor Lovinder Gill's clear, crisp sentences that spoke directly to the writer inside me. Some of his insights on structure and character have won a permanent place in my inventory of writing truths and will have veteran screenwriters reaching for their unproduced screenplays to correct their unconscious mistakes. For the novice screenwriter or storyteller in any medium, this book will save years of wandering in the wilderness and will give you the tools to tell compelling, emotion-based stories."
~ Christopher Vogler, author of The Writer's Journey

"This book is not merely instructional, it is inspirational. I think it might be the best book on screenwriting I have read. The content is great but it is presented in such a clear, compelling way that it is really hard to put down. I have read a lot of screenwriting books, but this one is not just rich with great lessons, it is passionately user-friendly."
~ David J. Greenberg, author of Screenwriting for Micro-Budget Films

Lovinder Gill is an award-winning filmmaker and has written four produced feature-length screenplays. He's been a college professor for over 20 years and has taught screenwriting to over 2000 students. He is also the host of the acclaimed podcast, Scriptcake. You can listen to his weekly interviews and screenwriting lessons at www.scriptcake.com.