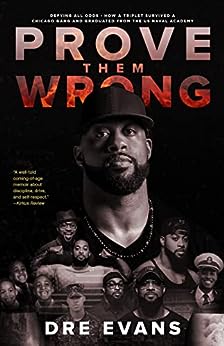 Prove Them Wrong: Defying All Odds, How a Triplet Survived a Chicago Gang and Graduated From the U.S. Naval Academy

At twelve years old, Dre Evans felt so proud to participate in his first drive-by shooting.

Everyone craves belonging and purpose in life. How far would you go to satisfy that need?

Dre started by joining a Chicago street gang. But one terrifying day, as bullets flew past his head, he wondered if that desire was worth dying for.

His answer—and a conversation with a man he viewed as his enemy—prompted Dre and his brothers to abandon the urban battleground and join an elite new gang: the US military. They would make history as the first set of African-American triplets accepted into the Air Force, Naval, and Merchant Marine Academies.

In this unfiltered coming-of-age memoir, Dre shares his inspiring story, challenges the stigma surrounding the word “gang,” and offers a fresh perspective on how to live a fulfilling life. Prove Them Wrong invites readers on a journey of self-discovery that defies the odds assigned by society.